Ants are one of the most prevalent insects, with more than 10,000 different species throughout the world. Ants are social animals that live in groups, or colonies, with a colony having as many as a million ants in residence. Three types of ants live in the colony: 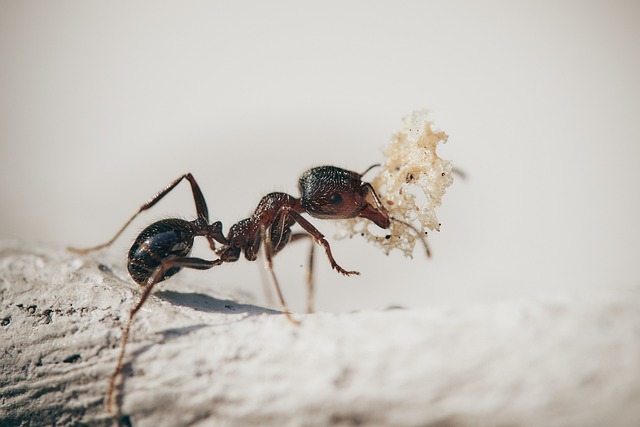 Ants are generally red, dark brown, or black. They range in size from 1/8” to 1/2”, though some species can grow as large as an inch. Their bodies consist of a head, thorax, abdomen, six legs, bent antennae, compound eyes, and strong jaws known as mandibles. The ant’s anatomy resembles a figure-eight, with a constriction between the thorax and abdomen. Queen and male ants have wings, though most common varieties do not usually fly. Ants don’t have ears, and “hear” through vibrations. They also lack lungs and instead process oxygen through holes called spiracles. Ants have two stomachs — one for food they consume and another to hold food to take to the colony.

Ants mature quickly, going from egg to larva to pupa to adult in a matter of weeks. Males typically live less than a month, dying shortly after mating. Worker ants live for up to 3 years and the queen can survive as long as 30 years. Once the queen dies, the colony is unable to survive because it is unable to replace her.

What are the unique characteristics of ants?

Ants are omnivores, feeding on anything from seeds to other animals. They are very organized, often working together in large groups to build their nest and gather and transport food.  Depending on the type, an ant can carry 10 - 50 times its own body weight. Ants communicate by emitting chemicals that warn of danger and potential food sources. As they travel, they discharge pheromones to mark their trail, which is why you often see ants marching in a line.

What are the habits of ants?

Ants prefer warmer temperature and are most active in the spring, summer, and fall.

Where are ants commonly found? Outdoors, ants generally make their homes beneath the ground, in mounds built at ground-level, in trees or plants, or in wood. Indoors ants build nests in a variety of places, and habitats of some of the most common ants found in North America vary:

What are the risks of having an ant infestation?

While most ants don’t pose a threat, they are a nuisance, contaminating food and producing unpleasant odors. Ants that nest in wood may also affect the integrity of a structure, especially if their nest is allowed to grow.  Acrobat and pavement ants may bite when they feel under attack.

While the most effective way to prevent or address an ant infestation is to call in pest control professionals, you can also try these do-it-yourself methods:

What can you do to prevent ants from settling in your home?

Ants are driven by a search for food, water, and shelter. While it may be impossible to stop every ant, following some basic guidelines can help prevent an invasion:

Are You Having Issues With Ants?
Get a Free Quote!